Reasons to visit the Book of Kells exhibition:

Medieval pre-Christian Ireland had its own alphabet, ogham, which consisted of 20+5 letters. Ogham in its early stages is primarily found on tombstones all around Ireland, Isle of Man and Western parts of Britain, but based on what we read in the medieval Irish tales, ogham might have been more widely used on less durable materials to write down messages other than the names of the deceased. What makes the tombstones with ogham inscriptions so mind-boggling is the value they hold for Irish historians, archaeologists and linguists who try to separate legends from history and mythical characters from real historical figures.

Once believed to be the work not of men but of angels, The Books of Kells is something that I never get bored of seeing – I’ve been there over 100 times! Probably the most beautiful book in the world, the magnificent Book of Kells is an illuminated manuscript created around 8 century AD. It contains the four Gospels of New Testament, and Latin text is intricately woven into the curls and twirls of Irish patterns, figures of animals, birds, and angels. The Book of Kells is just one of several Insular manuscripts from medieval monasteries of Ireland, England and Scotland, famous for their complex illustrations. If modern designers could probably spend a few months working on something like this, the Book of Kells is a product of many years of divine inspiration, skillful artwork and faithful dedication of the monastic community to produce a book that would glorify God and inspire His followers.

Also, you should watch this great Irish animation:

3. Proclamation of the Republic

One of the most important documents of modern Ireland, the Proclamation was read out loud in front of the General Post Office by Irish revolutionary and poet Patrick Pearse, on April 24th 1916, the first day of the Easter Rising. This text marked a new milestone in Irish history, and although in the next few years the country would be thrown into the war, the outcome of it would create the Republic of Ireland as we see it today.

4. Long Room in the Old Library

Although afternoon crowds slightly diminish the magnificence of Library’s curved ceiling and endless bookshelves, you will still find it both stunning and intimidating as you walk among the marble busts of famous Irishmen who line the Long Room like white ghosts of history. Guaranteed to be one of the major unforgettable moments of your trip, the library will stun you with its frozen-in-time feel – hasn’t changed much since it became full in 1840, and you can even smell those yellowed pages.

5. The harp of Brian Boru

The official national emblem of Ireland, the Gaelic harp, as seen on the coat of arms and the euro coin, was modeled on this 15th-century instrument. The way it stayed preserved, with all the intricate decorations and fragile strings, throughout centuries, means that the harp was probably manufactured for an important person. However, it is unlikely that this person was Brian Boru, one of the most famous High Kings of Ireland who ruled between 10-11th century and was praised in both Irish and old Norse tales. Still, it is nice to imagine that the High King of Ireland might have touched the strings of this harp in his castle chambers, and its enchanting sound echoed through the medieval halls.

Gift shops are gifts shops, you say, but I do find this one particularly drawing. I always recommend a postcard or two and a colouring book. Yes, a colouring book. Once you see the Book of Kells yourself you’ll understand. Growing up, I recall colouring in such Book of Kells-inspired sheets. So if you have some friends or family members of that age (any age really…), it’s sure to go down a treat. I’ve even bought a few for myself! 😉

1. The line:  In the past, a ‘skip the line’ ticket was available, but now since everyone is encouraged to book their tickets online, that means that there is no longer an option to skip the line.

2. The price: It’s almost doubled in less than 10 years from €10 to €18 for an adult adult today. Group prices (more than 10) are available but they’re typically restricted to certain times of the day, which skews itinerary-planning.

3. You only get to see 2 pages from the book itself, which is quite disappointing for some.

4. Crowds – Although the great guys at the entrance manage the get in / get out ratio pretty well. 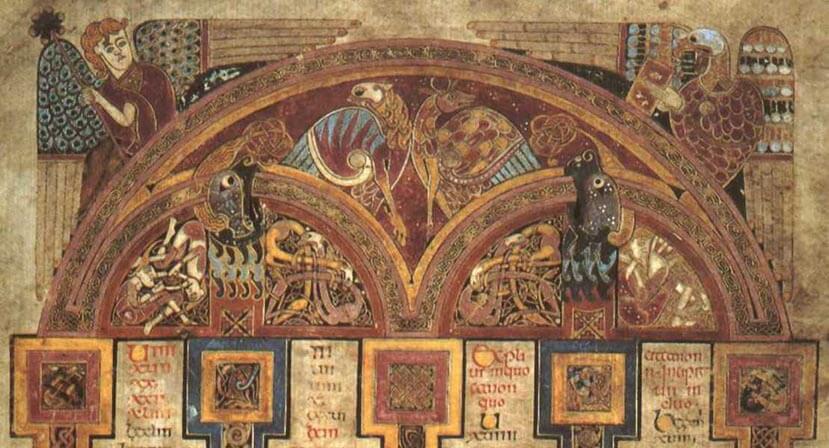 What’s the best time to visit the Book of Kells?

B. 4-5pm – This is near closing hours, so it doesn’t give you a lot of time. So why do you recommend this time? Well, because at 30 minutes before closing time (opening hours), it’s half price. And even if you don’t get in by that time, stay in the line. At about 5 minutes of closing time, they’ll let everyone in FOR FREE. Now, this means it’s a flying visit, so let’s make sure you know what to keep your eyes open for…